Chris Messina Talks Inventing the Hashtag and The Future of Tech 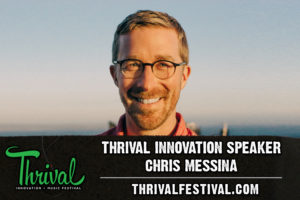 Chris Messina is a designer, writer, avid Twitterer, and speaker who’s known for inventing the hashtag. He works with developers, product designers, entrepreneurs, and communities to bring to life projects that should exist but don’t. Ahead of his speaking engagement at Thrival, we took a moment to speak with Chris Messina, one of our esteemed guest speakers about inventing the hashtag, the future of technology and what it’s like being a “Developer Experience Lead’ at Uber. This talk at Thrival is free to attend, however if you would like to experience 2 days of music featuring The Chainsmokers, Ty Dolla $ign, CHVRCHES, Hudson Mohawke and many others, you can buy tickets here.

There was a time when people just called it the “number sign” or the “pound sign.” Now, the hashtag has become its own digital phenomena. So to begin, how does one actually invent the hashtag? What went into that idea? What was the process?

I was an early Twitter user (#1186, to be precise) and many of us back then (as now) were looking for ways to make Twitter more topical and relevant to our interests. Lots of folks suggested that Twitter add conventional group functionality (with all the typical management overhead) but I felt that wouldn’t really work in the on-the-go, mobile context. But a lot of people were using Twitter on the desktop and weren’t thinking about that. Keep in mind that I proposed the hashtag on Aug 23, 2007; the iPhone had just been announced in January.

It seemed to me that IRC (Internet Relay Chat, a protocol for Internet text messaging) had a useful convention for different “channels”, so I cribbed that but suggested you could have as many “tags” per tweet as you wanted. So to add a tweet to a “tag channel”, you could just prefix a word with the “#”, and it’d get added. Simple, clear, and concise — and it worked over SMS (which was the primary way I used Twitter back then). Best of all, there was no group management — and you could add a tag wherever you could type text, so you couldn’t prevent people from using them either.

From global movements to revolutionary ideas, and perhaps to just random thoughts — the hashtag demonstrates that people can find common ground. What is the most valuable role the hashtag serves? Has it evolved in its meaning and application since its creation?

The widespread adoption of social media wasn’t a sure thing. There’s always been a lot of skepticism that people would ever get past sharing updates about what they had for breakfast, or what the latest celebrity gossip is — but the reality is, we’re all looking to connect and have thoughts and opinions that we want to share. We’re also pretty lazy — we want the most impact with the least amount of effort.

The hashtag works because it’s universal (i.e. works anywhere you can type text, just like emoji), it doesn’t take much effort and is easy to learn (just imitate other people who use them), and the rewards are significant (relative to not using them). Social publishing platforms have also responded to their users’ use of hashtags by improving the signal-to-noise ratio, and adding layers of meaning and context on top of trending topics.

As a result, social media has become the dominant way for people to make sense of the world around them, and to connect with other people who are interested in the same topics, or have similar views. The challenge, now, is to make sure that we don’t get trapped in our own echolalic filter bubbles, only seeing and hearing from people that believe the same things we do, and tricking us into adopting a view of reality that is inaccurate.

To the question specifically: no, I think the original intention I had when I proposed the hashtag still applies. I never anticipated that it’d become as ubiquitous as it has, but I’ve seen many, many things come out of Silicon Valley that have affected and changed culture, and I’m humbled by their success as well.

Your day job is “Developer Experience Lead” at Uber. Can you offer us some insight on what the day-to-day looks like at your job?

Other folks might call this role a “developer advocate”, but I focus more on design and product issues as well as marketing duties that relate to our developer platform to take that mantle. I also don’t code on a day to day basis, but I do understand technical systems, APIs, authentication, and other aspects of integrating software systems. So, my work is broad: I work with partners and companies that want to build on the Uber API, I speak at conferences about our work and the future of technology, I work with internal teams to encourage them to open up APIs or do integrations that I think will mutually serve each other’s companies, and so on. I’ve only been on the job about eight months — but it easily feels like it’s been two years given the pace at which we operate!

Pittsburgh has increasingly become a hub for technology and innovation. What excites you most about the city of Pittsburgh and what do you see it achieving in the next five to ten years?

I like the size and intimacy of Pittsburgh. I like its history and its resolve to modernize and create a truly liveable environment, given its industrial heritage. The student population keeps things fresh and flowing, and its world class universities are incredibly valuable as well. There’s also a great presence and appreciation for art, and that helps keep things in balance. It’s been several years since I’ve been back to Pittsburgh so I’m not fully aware of everything that’s changed, but from my friends who are there, I’ve heard that things have really improved. Of course, Uber has a presence there as well, and while I can’t say much about that, I am bullish on how that will work out. 😄

We’re going to ask you to see around corners for a minute and be clairvoyant. If you are to forecast out, what are one or two major developments within the global economy that will revolutionize the way we do business, or perhaps live our daily lives in the not so distant future?

Wow, that’s a tough one. I find that predicting the future never works out so well, but I do tend to live five years in the future anyway, so if I were to just describe what I see happening in my life or around me, I’d point to the rise of conversational software (bots, AI, voice) and ubiquitous computing finally becoming, y’know, ubiquitous.

Young people drive a lot of future technology trends because they’re not nearly as precious about the stuff, whereas people in my generation grew up without it, and so have more reverence for it. That’s why apps like Snapchat and Kik are so worth watching — teens gravitate to spaces without adult supervision that allow them to experiment and explore. Snapchat is teaching people to interact with augmented reality (as is Pokemon Go), and that trend creates a new kind of dynamic between people and their environments. Then you have Kik with its bot store, and that’s teaching young people to interact with software agents as though they’re just like their friends, and to use digital currencies like real money, which is something the west hasn’t fully adopted yet.

On the ubiquitous computing side of things — the technology that surrounds us and pervades our daily experience is getting smarter and more cognizant of our habits and behaviors, and is offering up ways for developers to take advantage of this new information. Uber, for example, launched the Trip Experiences API in January of this year to allow you to share details about Uber trips you take with third party apps. They can then use that information to predict where you’re going to be and when you’re going to be there to serve you better and more personalized information. It’s a tiny example, but with this kind of contextual information, entirely new classes of apps and experiences will be able to built, and that’s just one example.

So, these examples may not be about revolutionizing business or the way we live, but they certain spell vectors for evolving our relationship with technology!