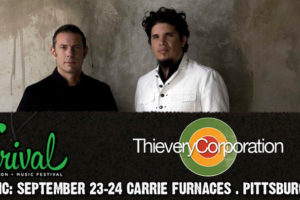 Thievery Corporation are about to come to Pittsburgh as a full 20 piece band for the first time and Rob Garza is very excited. The band has had a busy summer, touring at festivals across the US and traveling with a 20 person ensemble isn’t always simple. In addition to touring, Thievery Corporation is about to release a brand new album in February 2017 and in between shows, are working on finishing the production process. Read on to hear what they have been up to and buy tickets to see their debut full band show at Thrival, where they just might debut some material from the new record.

Thrival is all about connecting people with music, technology, new ideas, and shared experiences. When it comes to ‘innovation’ what is one of the things that comes to mind there, and how does ‘innovation’ resonate with you?

Rob Garza: Music is one of those things that’s always in the forefront of innovation when it comes to technology, and incorporating it with music. For instance, in terms of art, using computers and technology as a creative tool. In some ways they go hand-in-hand. When you talk about connectivity, and all of the basic things that connect us through cultures, and time, and things like that. That’s been one of the things that’s been a basic theme about what we do, is connectivity, and music, and technology, all comes together within music.

When it comes to Pittsburgh what’s one of the first things that comes to mind?

Rob Garza: What’s one of the first things that comes to mind? I grew up in Maryland, so one of the things would come to mind is [laughs] the sports teams like the Steelers, and the Pittsburgh Pirates back in the day. I actually had been to Pittsburgh, maybe once or twice, but this will be our first time as a band checking it out. This is a Thievery Corporation full band debut in Pittsburgh.

Rob Garza: We’ve been doing it for 20 years. At this point, we pick and choose our battles. Our touring, we go out a few times a month, so we do have a lot of time to be creative. When we are making records, we’ll take months here and there to do it. For instance, we’re finishing an album up that we recorded in Jamaica.

This is a new project you’re working on?

Rob: Yeah. We’ll take these time periods, and we’ll make them intensive about recording, or mixing, and things like that. For us, we’re not the type of band that goes out for 12 months, or whatever, then comes back. We do it in spurts, which make it easier for all of us. We don’t really get pleasure in being that kind of a band that is living on the road all year-round.

In terms of Thrival this year, is there anything new that attendees can expect? Are you debuting anything new?

Rob Garza: The new thing will be seeing the band for the first time in Pittsburgh. There’s a lot that’s never been done. For the audience, it’s an energetic show. We have about 10 singers onstage, different musicians, and different bands, different genres. It goes from super mellow to high intensity. It’ll be exciting to play in front of that crowd, seeing as how we’ve never been there.

Rob Garza: Starting out, we never really had any idea of what we were doing, and we never thought that people would like it. We created for ourselves. We did it as a hobby. Our studio was in the liquor room of the Eighteenth Street Lounge, and we would get together, me and Eric, and have drinks, and [laughs] make music for the hell of it.

We started putting out vinyl for fun, and we started to get calls from all over Europe, and the states, of people who dug the music. The thing with giving advice to people about doing music, my advice would be not to follow anybody’s advice. If you need somebody’s advice, you probably shouldn’t be doing music, because it’s one of those super tough things that I wouldn’t expect to make a living out of it. You have to do it, even if there is no monetary reward, or reward based on fame, the creative process itself is the reward.