Hanging Out with Harold: Chatting with Lee Kimball 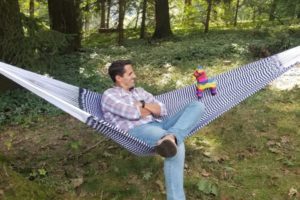 Harold met his match when he interviewed Lee Kimball, CEO of EquityNet, and former COO of Thread. Lee invited Harold and his entourage to visit his home in Fox Chapel to take in the suburbs and talk Pittsburgh and jobs. What we learned: both Lee and Harold have feisty sides.

Why did you become an entrepreneur?

Hmm… I don’t know… Why did you become a talking piñata? I don’t think it was a conscious decision, but it was more a function of being in the right mindset and disposition when the right idea came along. Then, it just clicked. I think that sometimes people want to become entrepreneurs because they think it sounds cool—I don’t think that’s quite right. There is definitely a lifestyle component to it, sure. I became an entrepreneur because I was presented with an idea, and I thought I had something to offer to help make it work.

But that’s just my professional answer. The real backstory is that I had too many drinks at my holiday party and a college friend told me about his crazy Haiti/responsible company idea, and I quickly said “yes.” It still seemed like a good idea the next morning, and still is 9 years later. Since then, I’ve loved it, and learned how to solve almost any random, crazy problem that popped up (for example, I didn’t know what a longshoreman was before their union strike mucked up our global shipping operations for two weeks). Since then, I have had the good fortune of being an executive at international startups but based in Pittsburgh.

Why are you still in Pittsburgh? We keep hearing that the start-up scene is great here,but it seems like there are more opportunities elsewhere.

I am not a native yinzer (from PA and a Steelers fan though… wait… do you have hands to hold a Terrible Towel?) but I moved here from DC. There, my 2-bedroom apartment cost more per month than the house with a yard in the city that we bought here. From a cost and ease of living standpoint, I couldn’t imagine starting a company with a growing family in San Francisco/DC/New York City. Beyond that, the startup scene is pretty great here. People genuinely want to help each other, and thereis not a sense of competition or jealousy of others’ success. There’s also the ability to quickly make connections and for good companies to really stand out.

I think I want to start my own business. Do you have any advice?

Be really good at both strategic planning, but more importantly, handling the uncertainty that comes when that strategic plan blows up. I see a lot of startups falter because they follow every shiny object/lead/ill-fitting customer and do not keep their eyes on their strategic goals and where they were going. That being said, startups are tricky and change daily, so you have to be ready to tweak those goals when it makes sense.

You don’t have to be risky, but you have to be ok with that uncertainty and risk. Mind you, I quit my full-time, well-paying job to go without a salary when my wife was pregnant with our first child, have been detained by 3 countries’ customs agents, got zika, and haven’t had a proper HR department for 9 years… so I’m not saying it’s for everyone. But if you thrive in uncertainty, I’d recommend letting yourself be open to your own (or others’) ideas and running with it.

Artificial intelligence, virtual reality and technology seem to be all everyone talks about, but I have no experience in it. What opportunities are there for me?

I guess I have 2 points:

Number one: Don’t just follow headlines: figure out what you like to do, and do that. Sometimes that means convincing the founder of a company you like that they are really bad at doing their own bookkeeping, marketing, woodworking, or whatever, and that they need you.

And number two: the Pittsburgh entrepreneurial community is more than just the tech sector. We are an old steel town with grit and tenacity, and it was the perfect place for us to start a manufacturing company. Aside from just robotics and software, there are dozens of fantastic companies working with physical goods here in Pittsburgh. Additionally, within the last 10 years, the number of companies with a social or environmental mission has skyrocketed. Currently, I am currently running a Fintech company that was transplanted to Pittsburgh from New York City because of the attractive business climate and expertise we have here.

What is your favorite place to take out-of-towners?

Well, I could not get any adults to go on a Ducky Tour with me, so I convinced my 4-year-old son to think that was what he wanted to do for his birthday. Then we had a picnic by the Point, including a… oh… um…this is awkward… a batman piñata

We aren’t friends. Can we wrap this up?

Aside from the super touristy stuff (worth it); we have an amazing food scene here. Since we moved here 10 years ago, Dinette (located in East Liberty) and Point Brugge (located in Point Breeze) have been our favorite restaurants with and without the kids. We tend to have a lot of families visiting us, and the museums (Carnegie Museum of Science, Children’s Museum, Carnegie Museum of Natural Histor

Most importantly, the music scene is great – headlined, of course, each year by Thrival. You should definitely take your Thread Backpack (available on kickstarter now), and attend Thrival Festival on September 21 ☺.

You should probably go home now, the kids are queuing behind you with a whiffle ball bat.